Yes, I’ve been very quiet lately – nothing strange there then eh? The last post was 7th August 2015 – with a drawing of me. Or at least a drawing using a photograph of myself as reference. The post was called Unnatural History and was drawn in my Stilman and Birn sketchbook.
As usual, what has slowed me down is my health. Things have not been great since my brain operation. Not long since the brain operation I was sent for a week of radiotherapy to my head…8th of June to the 12th.
Not long after that, my hair started to fall out…well that took all of a few days. I went from hair I could sit on to complete baldness within 2/3 days.

For years now, both Lucinda and myself had talked about going on holiday to Scotland – we had wanted to go there since we met in 2009. Lucie, being the thoroughly organised person she is decided that we needed treating to a holiday after years (six) of fighting cancer – bowel, lung, chest and brain cancer.
Very quickly, Lucinda sorted out the tour throughout September going to north west Scotland and then visiting Northumbria, Durham, Yorkshire, Lancashire then driving down to Gloucester and then Home (Portland, Dorset. Near Weymouth – England).
While touring Scotland, I became much more ill and started to lose the use of my legs. This all happened between setting off and getting home.
To cut a long story short…
We arrived home on October 1st and I was in a hospice by October 7th – less than a week. I left the hospice on 20th October.
All well and good you would think but by the 14th of November I was admitted into Dorset County Hospital with breathing difficulty’s.
Eventually, after sorting out an oxygen machine on the 19th November, I was allowed to come home.
The Scotland trip was great even though I couldn’t walk, I could sketch in the small sketchbook I brought along.
And here is a couple of those sketches…. 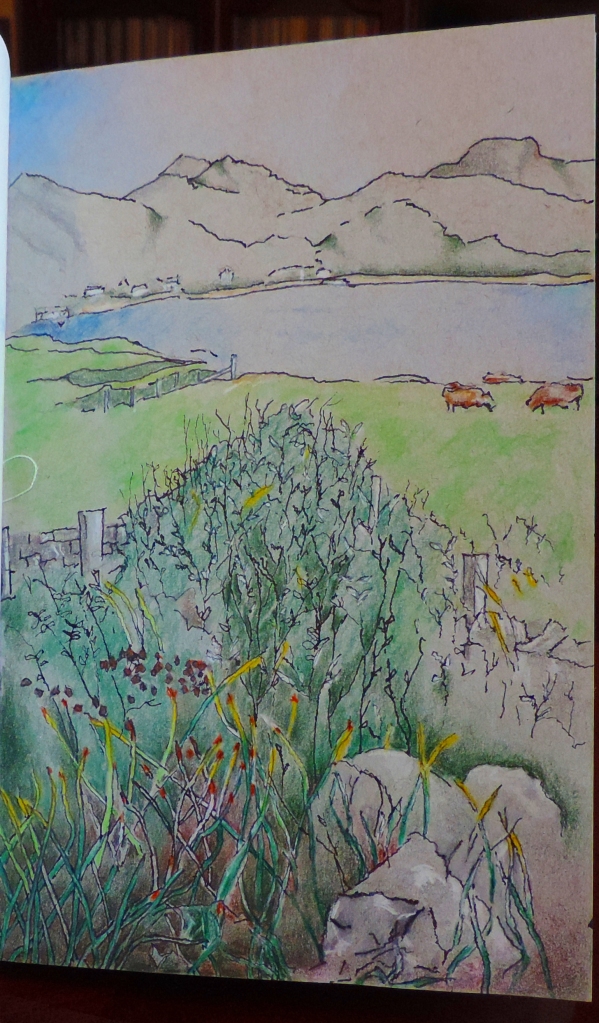